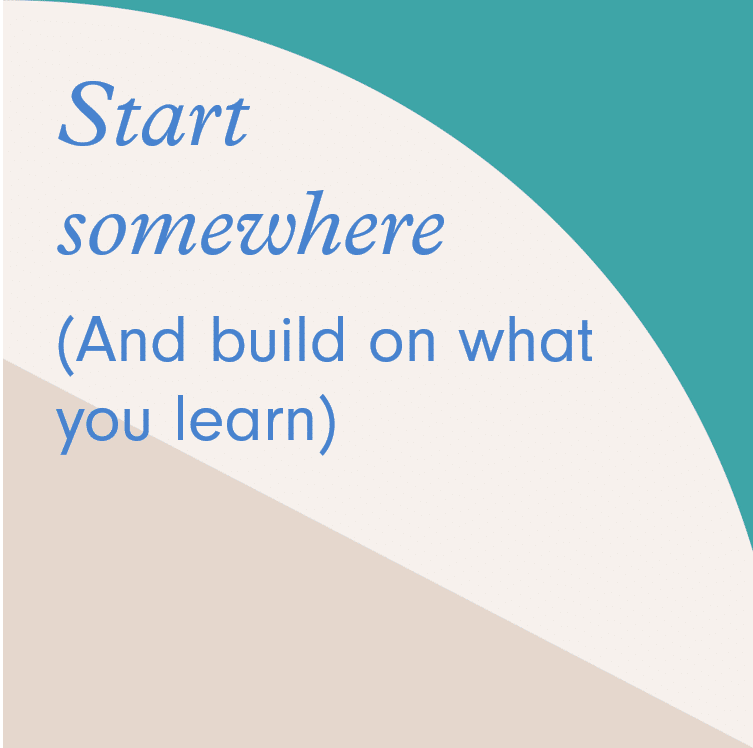 Start somewhere (and build on what you learn)

We approached our study into whether ‘tech’ is imaginable and usable for small voluntary organisations in three phases, where each built on the findings of the last.

We then created a survey to help test and quantify how far these barriers played out with small voluntary organisations themselves, and how they perceived tech more generally. It added much-needed context to the scoping observations. For example, 18% of respondents had n0 full-time staff – a good reminder of the level of capacity challenges these organisations face. It was also an opportunity to explore other points that kept coming up – for example, technical language was often said to be a barrier, but we wanted to understand which terms were least familiar or considered most jargony (‘agile’, ‘lean’ and ‘digital transformation’ turn out to be the top culprits).

The survey gave us more detail about the range of interpretations and current applications of tech within smaller organisations, and what people perceive to be its greatest value. It was useful to confirm that size is not a reliable determining factor for digital maturity, and that how well an organisation understands and uses tech is a complex, nuanced combination of elements.

The survey also contradicted some of our findings from scoping interviews, perhaps the biggest being that internal cultural and psychological barriers were the biggest things holding charities back. Very few respondents rated either their own or colleagues’ fear of change/the unknown as a significant blocker to progress, and n0ne said their colleagues were unwilling to try new approaches. Nor was there any clear evidence of ‘tech-burnt’ organisations. Lack of awareness about where to get help was an issue, as nearly 20% of respondents weren’t familiar with any of the digital resources and initiatives we listed. However, a new insight was that support from colleagues and other charities was both valuable and readily sought. We could see lots of organisations are on the right track, and able to give good advice to others.

We gained more insight into broad and baggy areas like ‘skills’ – we asked what specific skills respondents thought they needed and the spectrum was unsurprisingly wide, from having a basic level of confidence (‘I need more training in tech and not being afraid to push the wrong buttons’) to more specialised and advanced skills like managing data, digital product design, website and app design and developing online training. Most interestingly though, many respondents said understanding how to best employ skills, and to what end, was more important than the skills themselves – a strategic approach reflected in their qualitative advice to other charities.

Finally, and most valuably, the survey indicated there are ways we need to shift the conversation around small charities and tech. These points are outlined in the report but one is worth reiterating: reluctance isn’t the problem. Our small charity respondents generally had a very positive perception of tech’s potential to improve their services and operations, and most urge their peers to embrace tech as much as possible. The survey stats paint a picture of organisations keenly aware of the need for adaptation and digital progress, but hampered by the very practical barrier of no resource or capacity to do it (‘it’ being specifically ‘research and test new approaches’) – therefore tech is ‘imaginable but not usable’.

This gave us a new insight that there is at least a portion of this sector, the ‘early adopters’ who completed our online survey, who are eager and capable, and need practical help to realise their ambitions rather than ‘hearts and minds’ convincing that tech is important. While there’s still always more room for growth and improvement, this challenges a common narrative that most smaller charities remain untouched by, and even hostile to, digital change.

Although interviews and surveys were helpful for capturing some of the information we were after, we also wanted to validate these results by creating a rough prototype to test charities’ real behaviour. We knew that peer examples and advice were valuable, but what about that advice led people to engage, and then change their behaviour? Could we capture and codify this to enable good advice to help more organisations beyond an ad hoc, face-to-face basis?

Throughout this project, we have fed the insights gained into live projects, such as a Funders Learn Tech event, CAST’s Design Hops for Funders, and an exploration of the question of ‘digital maturity’ in the sector. The resulting report and summary recommendations are an amalgamation of each of the stages outlined above, coupled with reflections on the feedback and responses we’ve had when sharing these findings.