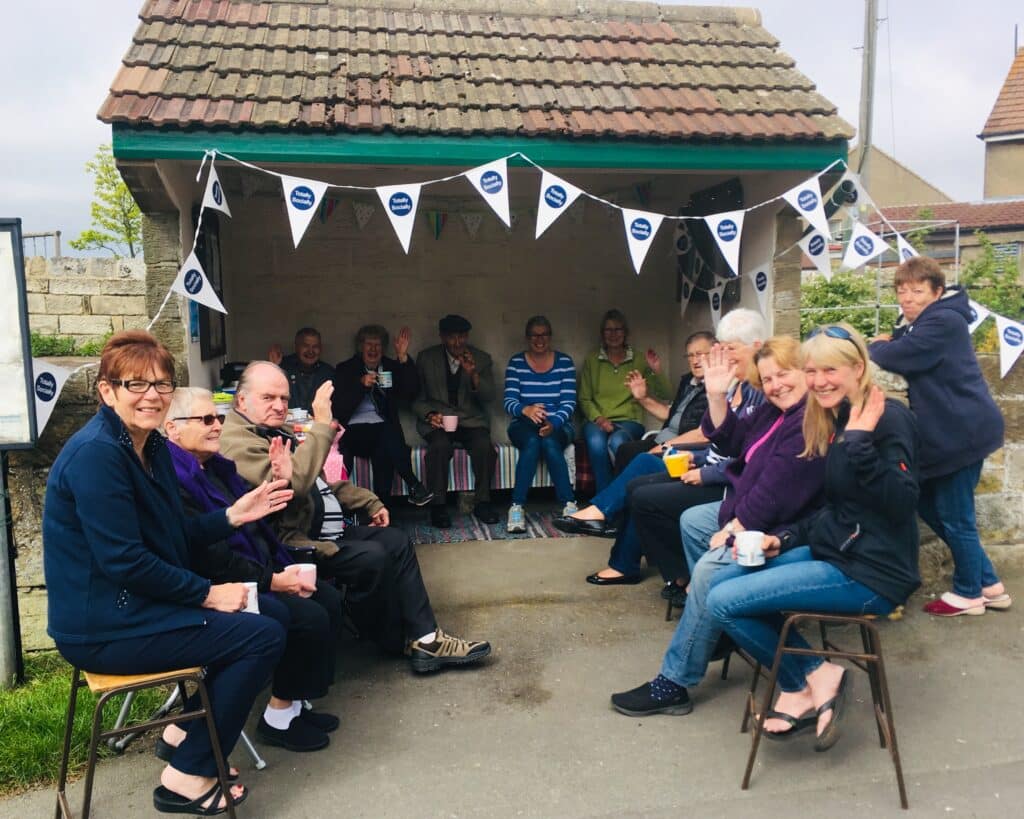 The story of Stainsacre Social

Written in March 2020 by: Charlotte Angus

Stainsacre is a Yorkshire village 2 miles from Whitby where transport via bus has stopped due to cutbacks. This has had a big impact on the people living there causing some to relocate. As a Totally Socially Development Worker and Stainsacre resident, I wanted to get the community talking about solutions to the transport issue, but where could we meet when there was no obvious place? If I tell you that we first met at a bus stop, surely you would be intrigued to know how this came about and where we are now.

Why a bus stop?

I was walking my dog and walked past a disused stone-built bus shelter. It occurred to me what a great little space it was and made me wonder if people would meet me there to discuss our local transport issues. I asked my mum (and fellow Stainsacre villager) to come along for moral support to help me start a meet-up. We started by cleaning out the bus shelter to make it a place that one wouldn’t mind passing an hour or too. We added cushions, chairs, stools, fairy lights and a trolley full of tea, coffee, cake and biscuits. Then we made a basic leaflet and spent three hours walking around the village talking to people about our intentions and posting the leaflet through doors.

At the first meet-up, 20 people arrived. In fact, they came early and left late! People discussed how the lack of transport had effected them and people they knew – some of who were now stuck in the village or facing a long walk (often pushing a wheel chair) down unsuitable paths or roads. It was a really happy event and we decided to do it all again and meet once a month.

In terms of progress in dealing with the transport issues, many solutions have come out the meet-ups – not just the one! For example, small pockets of people have begun to share taxis, a conversation with the local community transport organisation was held and an offer made, and some neighbours help each other out by giving lifts to town or doctor’s appointments.

Our monthly meet-ups have become more than a way to solve local transport issues now. Parish Councillors have made a good connection with the group and are now a huge part of running it. It’s used as a way to feedback from council meetings to people who were unable to attend and to ensure that people are able to have their say and their views are taken back to the parish council meeting. Organisations focussing on health and security, such as the Fire Service, have also shown an interest in attending. It is seen as a great way to access the views of a group of local people and get knowledge to them.

The community has become generally more connected – people now know each other and, in some cases, by their actual name not just “the egg lady”! At the meet-ups, those attending talk about many things such as the history of the village and their past. They swap vegetables and books. Some of the elderly people have begun to mix with people they didn’t before and it’s become a gathering to look forward to. As people began to know one another, they decided to host in their own homes (not just the bus shelter) and assisted those who might struggle to do this. In one instance, a meeting host struggled to walk, so his neighbours made the tea and helped him to set up. What is great is that people from nearby villages have also started attending, often with a view to setting up something themselves or to feedback to the group because of their own community connections.

As a result of the unexpected popularity and success of the group – now known as the ‘Stainsacre Social’ – the reason for meeting up has widened to not just be about finding a permanent solution to transport, it now aims to connect people in order to form their own solutions to wider local issues. Looking forward, the group would like to formalise and work on other things like running a village hosted event. Who knows where the Stainsacre Social will go next!

Taking a risk and not having an initial ‘outcome’ has been liberating. It is very much the Totally Socially way! People create their own aims and form their own solutions based on the knowledge and skills they already have. They have their own strengths and ideas and they should be allowed to try these out and, if necessary, fail and learn for next time. Being part of the Stainsacre Social has been great on so many levels. As a resident I now know many more people, some well enough to offer a lift to the local shops. On a professional level, it’s great to see that people only need the seed of something new in order to mould it into something far better themselves.