Since 2012, IVAR has been working alongside these funders to learn from and support the collaboration itself. Specifically, the funders wanted to reflect on the challenges and achievements of this form of funder collaboration; and the underlying assumption that aligned funding is a suitable strategy for achieving systemic change in a complex field such as child sexual exploitation.

In 2016, we brought together what had been learned so far in a briefing, Funder collaboration: Is it worth it? In it we explain that CSEFA members believe that by bringing together funders’ knowledge, reach, resources and time, more has been achieved than would have been the case had the funders worked individually.

Find out more about the project


Back to Live Projects 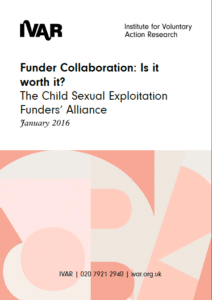 Funder Collaboration: Is it worth it?