These principles have been developed by a group of funders and funded organisations:

‘Funder-led. Bureaucratic. Time-consuming. Misunderstood.’ All words that have been used to describe UK grant reporting – the process (or processes) by which charities report their progress to funders. No matter how simple and clear an individual funder’s system might be, charities can be forced to repackage similar information for different funders, on different dates, with different word counts and in different formats.


A group of funders and charities have developed a set of principles to make grant reporting a shared, more meaningful and mutually beneficial experience. Nine funders are testing how the principles work in practice.

1. Funders explain why they have awarded a grant.

2. Funders and funded organisations are clear about what grant reporting will look like.

3. Funders are clear about the type of relationship they would like to have with the organisations they fund.

4. Funders only ask for information they need and use, and question whether they need bespoke reporting.

5. Funders give feedback on any grant reporting they receive, and share their thoughts on the progress of the work.

6. Funders describe what they do with the information they obtain from funded organisations.


A set of principles to make grant reporting a shared, more meaningful and mutually beneficial experience.

Read more about the principles

The starting point for this initiative was a shared view – across the group of funders and funded organisations involved – that current reporting arrangements can be burdensome rather than useful. The group’s goal is to address and reverse that. In attempting to do this, we have recognised and acknowledged that the power to make change happen – to do things differently – rests with funders. The design of reporting arrangements – format, frequency, content – is in their gift. So, although the process of developing the principles set out here has been genuinely collaborative, it now falls to the funders involved to find ways to apply these principles to their practices.

1. Funders explain why they have awarded a grant.

Organisations want to know why they have been funded. It helps them to understand if and how they fit into a funder’s broader strategy, and what that funder expects them to track and report on. Clarity at the start of a grant relationship could prevent misunderstanding and wasted effort later on. Funders could identify which aspects of a funded organisation’s work that they are particularly interested in – or not interested in – and share their views on what success could reasonably and realistically look like. This would help organisations to provide focused reporting that gets to the heart of what funders are most interested in.

Example: A funder shares a short explanation of why they made the grant in the grant offer, drawing on notes taken from trustee discussions, and/or the grant manager’s assessment of the application.

2. Funders and funded organisations are clear about what grant reporting will look like.

It is important for funder and funded organisation to understand each other’s expectations of grant reporting. Funders should give organisations clarity over any non-negotiable reporting requirements when awarding a grant, and undertake not to change what those requirements are. Wherever possible, reporting processes and formats should be agreed that meet both parties’ requirements, circumstances (including pre-existing commitments of the funded organisation) and capacity. Small changes to funders’ systems could have a big impact on the organisations they fund, easing pressure at busy times and making progress reports more manageable.

Example: A funder specifies that their own grant reporting form is used, but invites the funded organisation to propose a timescale that coincides with milestones in the work being funded, or other funders’ timings.

3. Funders are clear about the type of relationship they would like to have with the organisations they fund.

Example: A funder includes in the grant offer an expanded reporting schedule – with a description of the type and amount of contact they expect to have with the funded organisation.

4. Funders only ask for the information they need and use, and question whether they need bespoke reporting.

Organisations often have many funders, and have to report on the same work in different ways. This can mean they have to prioritise reporting to funders over their own Trustees, or their annual report. Funders should find out what reports organisations are already producing and ask themselves what more they really need. If they do need extra information, funders could consider whether this ‘bespoke’ reporting is proportionate to the size of the grant, the size of the funded organisation, and which other funders are asking for similar things.

Example: A funder giving a small grant asks for no reporting other than the organisation’s annual report and accounts listing the grant, and may meet or visit the funded organisation instead to hear about progress.

5. Funders give feedback on any grant reporting they receive, and share their thoughts on the progress of the work.

Funded organisations put a lot of effort into the reports they submit to funders. It is therefore important for funders to acknowledge receipt of reports and provide feedback. This is an opportunity to validate good work and celebrate success, as well as address where things may not have gone according to plan.

Example: After receiving and reading a report, a funder gives the organisation a phone call to acknowledge the report and briefly discuss key points. The funder asks any follow up questions.

6. Funders describe what they do with the information they obtain from funded organisations.

Example: A funder writes a short statement that explains how they make use of grant reports across their organisation and includes this on their website and in grant offers.

How are they being used?

A number of funders are using the principles, as outlined below. Many have also made specific changes in response to the Covid-19 crisis, which you can read about below and in this blog.

We will use the set of principles to challenge ourselves and reflect as we review our reporting approach. We will be testing out co-creating a reporting format with a few grantees who are onward funders of grassroots organisations. In response to Covid-19, grantees can discuss with their grant managers any shifts in activities, budgets and timelines they feel are necessary to respond to their situation. Where they have upcoming annual reports, they can also discuss with their grant manager whether a delay to the submission of that report, or the completion of a simplified form now, would be most appropriate. We have also produced an FAQs document on our website (https://www.comicrelief.com/covid-19-faqs) drawn from all the queries we have received from grantees in the past few weeks and this will continue to be updated weekly.

At a high level, we are keeping the spirit of the principles – using more conversations and less paper – in mind as we develop our new funding strategy. More specifically, we lay out our approach to reporting on the Grantee Resources section of our website, as well as in the ‘Welcome Pack’ organisations receive once the grant has been made. We also give written feedback to organisations after a grant has been agreed. We have added a field to our database to ensure that this is done consistently and in writing, on top of any informal feedback that grant managers may give over the phone.

We are keen to be as flexible as possible in response to Covid-19. In order to do so, communication from our grantees is crucial. We’re adapting our response as new issues emerge, such as delivery being suspended or staff being furloughed. Challenges like these allow grantees to get a better understanding of their situation; providing us with this intelligence allows us to evolve with them.

Joseph Rowntree Housing Trust now includes brief notes in grant offer letters to successful applicants, summarising why the choice was made to award the funding, and highlighting aspects of the application that particularly stood out to the awarding committee (principle 1).

We are reducing the amount of bespoke reporting we require of our grantees, and want to tell grantees more clearly how we use the information they provide to learn and improve.

In response to Covid-19, we are not expecting grantees to hold to agreed reporting requirements. They can discuss this with their grants manager, along with any agreement to extend timetables for work, change objectives or payment schedules, and to convert programme grants into core and operating costs.

We will use the principles to continue our internal conversations about how we manage Partner relationships, and stimulate discussion with our Partners on their preferred reporting formats.

We are sharing the principles internally and testing with trustees and the grants team.

In May 2017, the Evaluation Roundtable network agreed to explore whether grant-making charitable trusts and foundations could move towards more aligned grant reporting arrangements. We analysed 12 such arrangements for areas of commonality and initially six trusts and foundations agreed to be part of a working group, joined by funded organisations.

Our intention from the outset was to see how much progress could be made over two workshops and early on we decided to focus on core funding, rather than project funding. At the end of the second session we all felt there was merit in sharing and testing the principles we had developed. For each funder, this will mean something different. For some, the principles will facilitate internal conversations and thinking; for others, they will be directly applied to a grant-making programme. 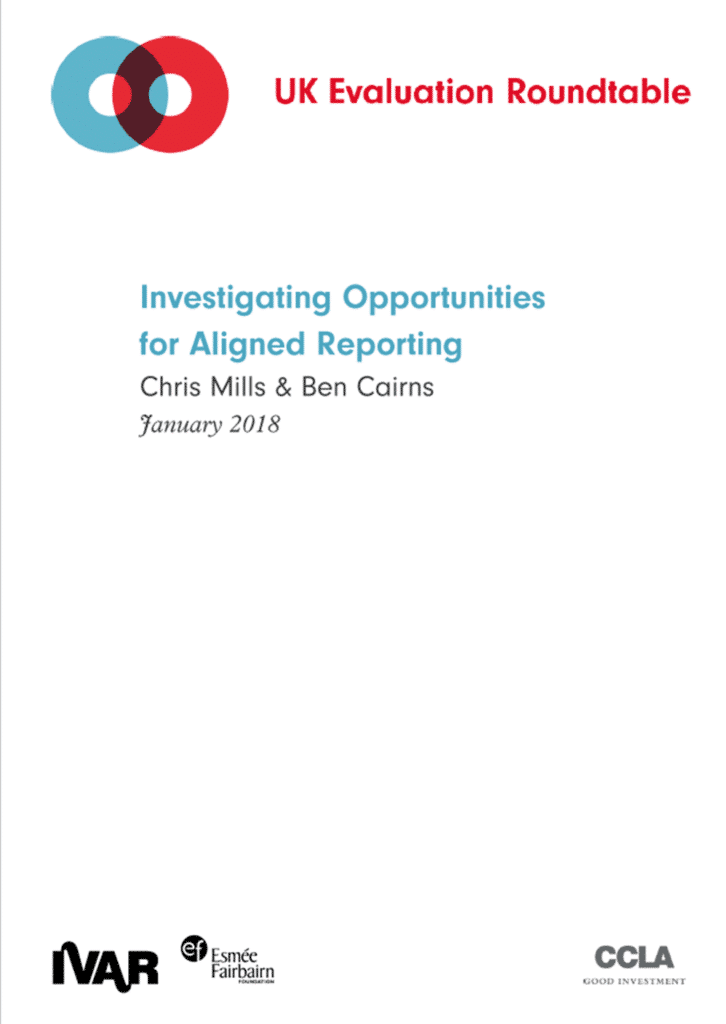 
This paper explores the opportunities for UK charitable trusts and foundations to align their grant reporting requirements.

Find out more about our approach to research, our services and the methods we use.

Get in touch with your feedback or to join the group of funders testing the principles.